It’s been noted that 2020 reads like a Stephen King novel, and that doesn’t seem too far off base, Mr. King has even said as much.  It was tempting to write about the illogical and rapid rise of the stock market, which is very concerning, but the virus itself remains the biggest issue from a public health and economic perspective.

As the country begins to reopen it appears that we’re collectively ignoring what’s happening with the virus.  For example, in North Carolina where I happen to live, we’re averaging around 1,000 new cases each day.  The NC peak in April, at the height of “stay at home,” was around 350 new cases per day.  These numbers are heading off the charts as we attempt to quickly return to the old normal.  There are similar trends in other states such as Arizona, Florida, and Texas.

The national numbers are more challenging because the spike, and subsequent drop in New York City was so large it throws things off a bit, but not too much.  One source I’ve been following closely is the COVID-19 Simulator created by Harvard Medical School and Georgia Tech.  It allows you to look at state and national projections under a variety of scenarios.  The data is updated on a weekly basis.

Let’s look at North Carolina for example.  I’ve chosen their “Minimal Restrictions” scenario since that’s the curve our actual numbers are following, and we’re using the “log” scale, which means the axis on the left increases exponentially. 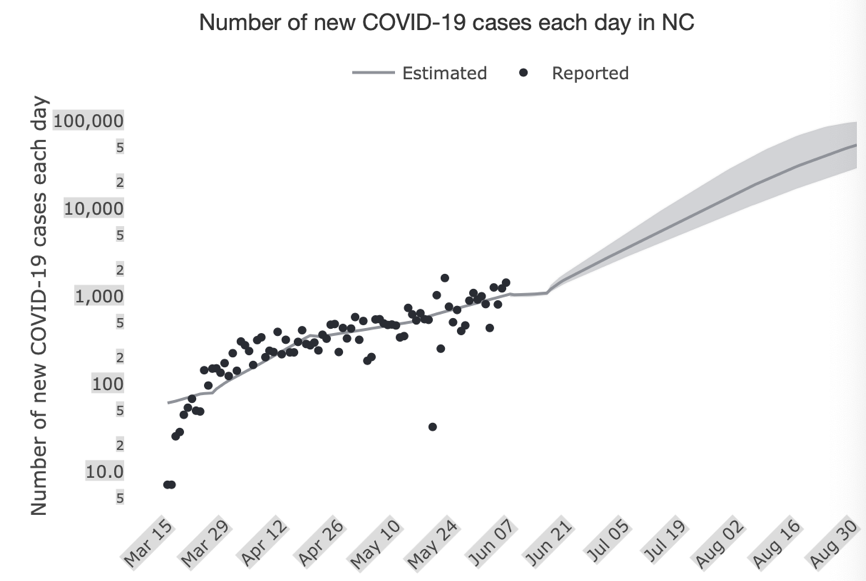 As you can see, this trend is not slowing down, and only gaining steam.  This implies that by July 4 we might see over 3,000 new cases per day in North Carolina, triple the current rate, and it keeps going up from there.

Let’s look at the national picture using the same settings. 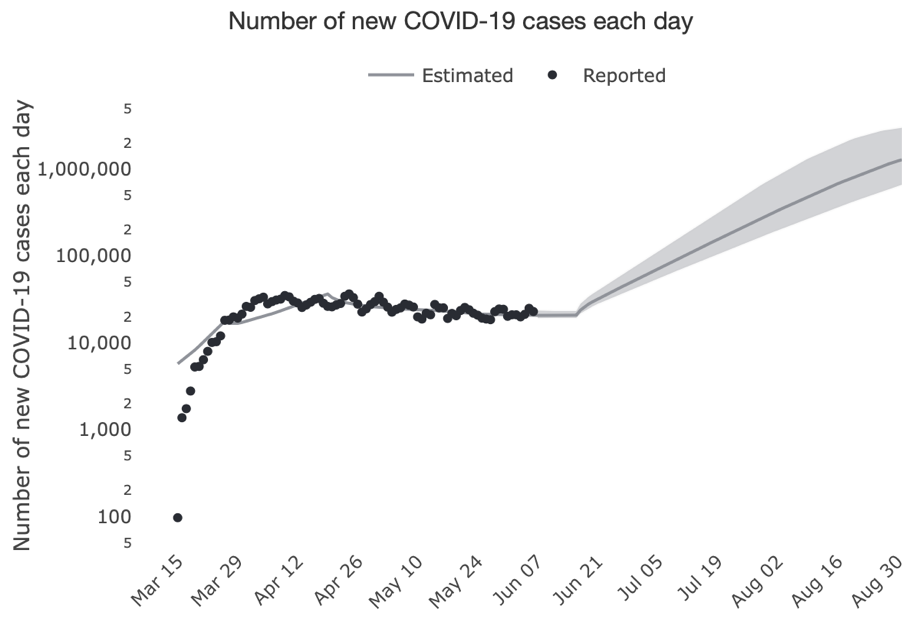 The number of national cases is currently decreasing, largely due to New York City making great progress; however, two weeks from now we’ll be back to our past national peak, rapidly heading north.  By July 4th we might see around 66,000 new cases per day, which is almost twice as high as the April peak.  This is the exponential growth that keeps doctors up at night.

While Harvard Medical School and Georgia Tech are no slouches, Columbia and Mount Sinai are independently coming to similar conclusions. 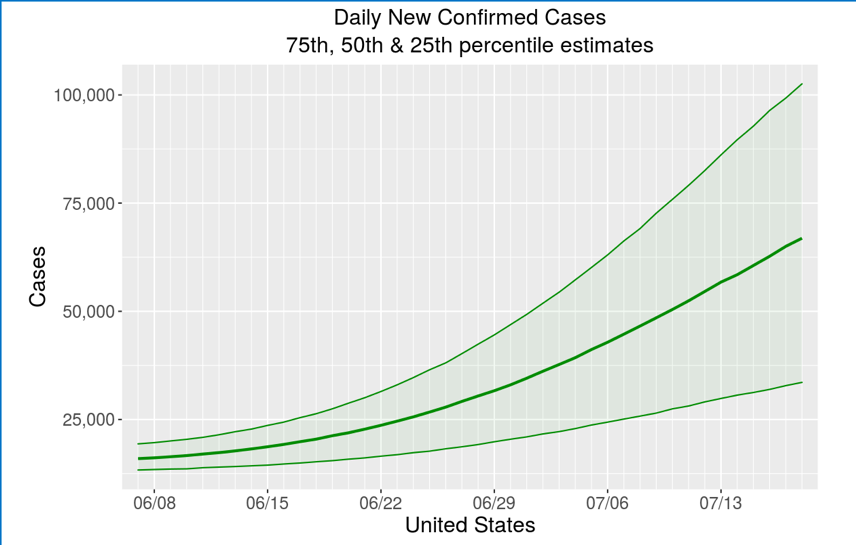 I’ve provided links to both sources so you can play along at home.  The sites offer different views, and as you can imagine, the numbers related to things like ventilators and hospitals beds are even less reassuring.

These numbers will never capture the lives lost and shortened due to the economic stress and uncertainty that is surely playing out in the form of mental health issues, heart disease, and other systemic issues created by the toxic effects of stress.

It doesn’t seem like we were ever out of the woods despite our natural human desire to want to have it over with, and unfortunately this has all been over politicized.

I think the important takeaways are:

From an investing perspective we are sticking to our mantras of staying with an appropriate allocation between stocks and bonds with a persistent long-term view.  The approach is boring, but it works, and gets the job done in the long run.

I would also warn you against the temptation to actively trade stocks, or other securities, for short term gains during this time.  There are very large, professional, institutional investors, who literally specialize in nothing but market volatility, they will happily eat your lunch, and maybe dinner.

Please stay well, and follow all guidance related to avoiding the virus, and we’re always here to help with your financial life.

Get the ball rolling today.

Some things in life can wait. You’re future isn’t one of them.